What We're Made Of, Poems by Lisken Van Pelt Dus 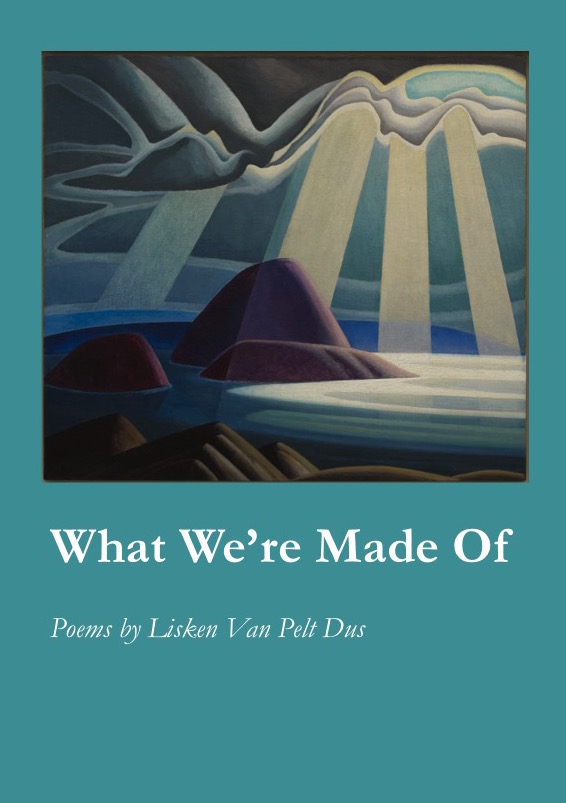 In What We're Made Of, Lisken Van Pelt Dus explores appetite and darkness, love and perspective. This book of passionate, intelligent, and tender poems was a finalist for the Patricia Bibby First Book Award and a semifinalist for both the Brittingham and Pollack Poetry Prizes and the Kathryn A. Morton Prize in Poetry.

"What We're Made Of is a many-faceted love song to the fiery core beneath the earth's 'merciful crust,' to rocks that surface in slow heaves as our planet 'spin[s] ceaselessly/into the sun,' to birds that slice through the air and disappear under eaves to leave the mysterious gift of a single feather, to rivers, fireflies, quarks, protons, stardust and, not least, to the generative presence of a loved other. 'Words,' Van Pelt Dus says in the poem 'Lacking Wings,' signal 'the color/of the flight we'd like to take,' and indeed these beautifully rendered poems have turned words into fresh seeing that soars and glows, lit by intelligence, appetite, and deep regard for the visible and invisible elements-mysteries, really-that surround/live within us." - Leslie Ullman

"What We're Made Of lives vividly in intimate relationship in and with the natural world, a world populated with black magnolias, birds that cry out with 'indignant hunger,' 'the green wheeze of crickets,' and where intimate human relationship is 'a brush with something wild that lives/on the other side of the world.' Lisken Van Pelt Dus gives the reader a kind of contemporary Adam and Eve; 'we' is the signature pronoun of her collection, a 'we' composed of dark matter, the fifth element, ghosts of the lost, particle theory, vanishing points, and 'the stardust we are made of.' These poems romp gloriously with the centrifugal energy of desire but are simultaneously wise with knowledge of the centripetal forces that are both 'our disintegration' and the self 'working toward a center.'"- Rebecca Seiferle

"What We're Made Of discovers what is elemental in the self by shedding light on the elements of the world--air, fire, black magnolias 'dropping themselves flake by flake' into a river. In these lyrics, nature is both intimate and metaphysical, a turtle cradled in the hands of a child becomes 'a mottled carapace domed like a miniature arc of Earth.' Van Pelt Dus's marvelous ode called 'Air' mixes molecules and melodies, the habitat of gods with the smell of warm pretzels. Using language as precise as science, these poems capture the mystery of life--its unassailable 'knot' and 'the endless ropes of us untethered.' Van Pelt Dus finds philosophy in a bike ride, a Paris stairway, the 'crows' near-constant braggadocio.' These poems are not afraid of wisdom, and the careful reader will reap the rewards of their stunning insight."-Casey Charles

Lisken Van Pelt Dus is a poet, teacher, and martial artist, raised in England, the US, and Mexico, and now living in Massachusetts. Her work can be found in such journals as Conduit, The South Carolina Review, qarrtsiluni, and upstreet, and has earned awards and honors from The Comstock Review, The Atlanta Review, and Cider Press Review. Her chapbook, Everywhere at Once, was published by Pudding House Press in 2009. What Were Made Of is her first full-length collection.