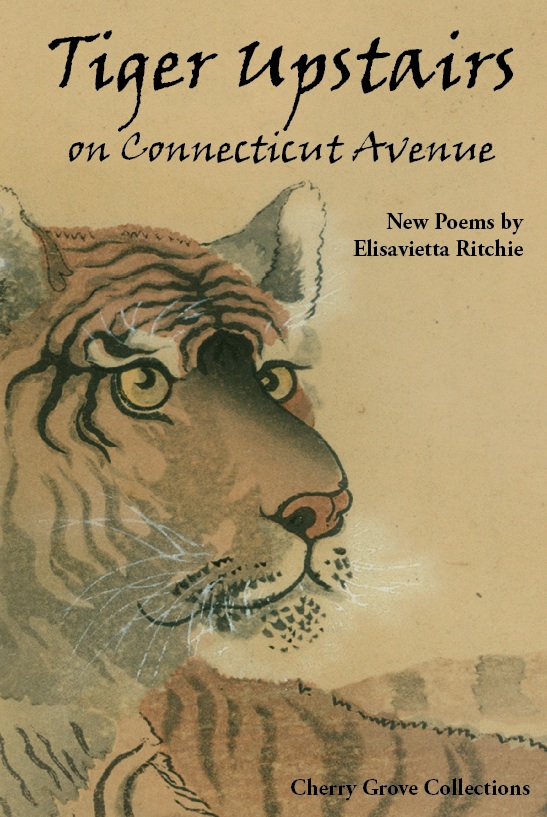 Tiger Upstairs on Connecticut Avenue is the perfect title for Elisavietta Ritchie's new collection: roaring, juxtaposing the outrageous and the mundane, and leaving nothing from her omnivorous imagination.

"...reading some of her poems is akin to watching a wick sizzle down on a firecracker, waiting for the pop, the smoke, and the final hiss...Whether looking through the scrim into death, or looking back through history at her own family, I imagine Ritchie to be some mad cheerleader for passion, stealing blackberries, loving a dying friend, or recuperating from a bad mushroom trip, all the while refusing to give up, to be satiated... . Life and death. Passion and its opposite, her touchstones...that give her voice power; after all 'like fire, when we no longer burn, we die.'"--Scott Whitaker

Elisavietta Ritchie's poetry roars with a vitality remarkable for its intensity. Like a swimmer surging through waves to a rescue of meaning, she leads her readers by both measured strokes and daring experimentation. Immersion in her poems becomes an exhilarating experience.Martin Tucker

In Cormorant, Elisavietta Ritchie draws us into a natural world of toads, owls, humans, rats, medusas, et al., a world of threats from within and without, in poems of predation and menace and humor on land and sea, in poems that sing in a vigorous lyric voice that lingers, like a favorite song.Greg McBride

Witty, sharp, sensual, possessed of a scientists eye for the precise detail, the memorable image. Elisavietta Ritchie is in love with the natural world of maggot, freezing bilge, the owlon unheard wings, berries fed on ash and blood, branches with lavender fire. She brings a tuned ear for the music of language, a storytellers gift and a generosity of spirit that delights as it informs. The book deserves an enthusiastic audience. --Colette Inez

In her latest collection, hallmarks of Elisavietta Ritchie's condign grasp of worldly woes and joys take hold at the start and thread intently throughout this rich panoply of poetry. The opening 'Offering' sets the tone; in a powerful follow-up, Questions, Assumptions tracks and explores humanity's warring impulses. It's a further pleasure to welcome many a favorite seen earlier in different settings, such as 'Snow in Leningrad' and 'Terra Irredenta.' And a hard-earned humor salts this full menu, as in the last lines of 'Trying to Track Lao-Tse: '...I pencil my own/words on tatters of paper but leave/no insights foranyone.' Clear the decks for Awaiting Permission to Land!" --Eli Flam

Several composers, including Jackson Berkey, David Owens, David L. Brunner, and others, have transformed her poems for voice and piano.