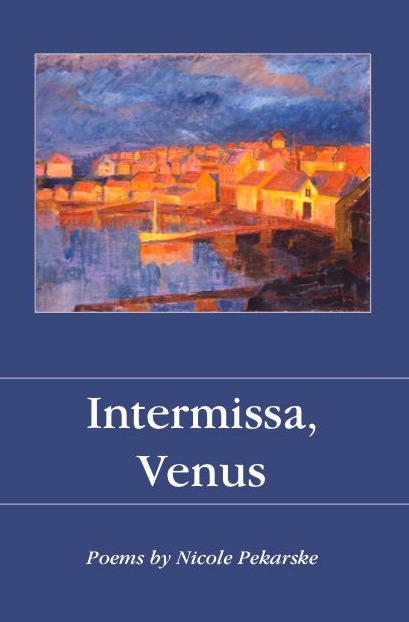 The elegant poems of Nicole Pekarske's first collection Intermissa, Venus pierce the heart of their subjects with visual precision and haunting, understated music. The rich scenes of these poems unfold greater depths in the reader's mind long after the page is turned.

Nicole Pekarske has studied and taught in Maryland, Virginia, Missouri, and London, and has published poems in such journals as  Georgia Review, Gettysburg Review and Rue Bella (UK). This is her first book-length collection.

"Nicole Pekarske's first collection of poems, Intermissa, Venus, is so linguistically at ease with its corporeal, carnal self, its Venusian awareness, the reader might be tempted to miss the ritual and spiritual subversive life under the sexy surface. The idiom and craft here are perfectly calibrated. The heartfelt subject, though, is a crisis of faith--of love, its laws--in which poetry is the redeemer."--Stanley Plumly

"What a delight to come across a first book so accomplished and so varied, so willing to take on both formal concerns  (in the crown of sonnets), and dramatic personae (in the leper colony!), a book willing to treat the vagaries of the vegetable world and the travails of the individual psyche with the same acute and unflinching, analytic tools. Nicole Pekarske's work is informed by the Romantic poets, Keats most certainly, but also by the subversive wit of poets like cummings and O'Hara, and this unlikely marriage yields a powerful and unexpected pleasure."--Lynne McMahon

Nicole Pekarskes poems rehearse the great human drama in Chekhovian scale, balancing her finely perceived perceptions of the day-to-day world around her with her equally fine perceptions of the tumult and fire of the world within.  Carried along by a dazzling and accomplished style, the poems of Intermissa, Venus are, by turns, haunting, enigmatic, and passionately alive.”--Sherod Santos