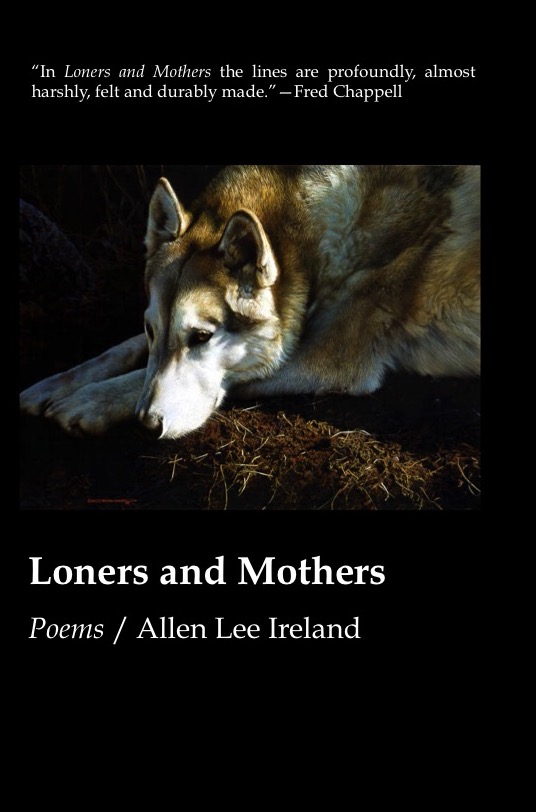 Allen Lee Ireland's Loners and Mothers explores the complicated psychology of loners within a variety of contexts, their obsession with family, and their many means of escape from what they perceive as a dark and frightening world. Like the woods in Frost's famous poem, Ireland's verse is "lovely, dark, and deep." Yet, through it all, there is respect for existence and an abiding concern for the individual life.

"With a few deft strokes of his keyboard Allen Ireland is able to suggest the character and outline of deeply troubled relationships. Sometimes, as in 'To a Movie Actor' and "Crying," his poems have the sharp force of epigrams. Others, like 'Silence' and 'On the Plains,' employ a solitary human figure to portray a terrifying loneliness. In Loners and Mothers the lines are profoundly, almost harshly, felt and durably made."-Fred Chappell

"Readers of Loners and Mothers will find themselves transferred to a timeless prairie, which strangely mixes raw candor with sophistication. Ireland's lines are sidewinders, sliding towards his hearers with skillful, mesmerizing music, clear thoughts, and respectable, suave emotion. His themes are eternal and relevant - bonds between a father and son, affection for a mother, a lover's defeat, a Christmas tree as the symbol for undesired though thriving, alluring life. This poet's gaze is concerned primarily with the human, his eye 'continuing,' and, one intuits, not easily satisfied. Indeed, he leaves his reader fulfilled - but at the same time, wishing for more." -Jennifer Reeser

"Loners and Mothers is a collection of poetry short enough to be read in a single sitting, but powerful enough to stay with the reader for far longer. Ireland has the gift, at his best, of capturing a brilliant image in a few words, and then imbuing that image with a deeper, more profound meaning and purpose. This is a graceful and thoughtful collection of poems, a bright example of what can be done with a few short lines and a gift for phrasing and imagery."--IndieReader

"Ireland's collection proves him to be a poet's poet. His techique is carefully deployed without being flamboyantly displayed, proving him to be a craftsman of real subtlety. It's hard to read through without thinking of Robert Frost, but Ireland's tact prevails, and the influence is only a haunting echo.  There are many treasures hidden throughout the book, and it will be a pleasure for astute readers to seek them out.  This is a vibrant compilation that will appeal to poetry aficionados and amateurs alike."--Kirkus

"In Loners and Mothers we are presented with quiet poems that work to illuminate the inner life cast in stark contrast to the outer world we all see. The title for this collection seems to this reader to be wistful and intriguing, setting up a kind of relation that the collection will explore. The poems here are not broken into sections, which makes for an immersive and continuous reading experience but misses a chance to strengthen the collection through thematic divisions. The first line of a poem is a chance to immediately set an arresting scene or pivotal image, to establish the overall dynamic of a poem. I noticed many poems here where this was handled with great dexterity, where the first line was compelling and immediately absorbed me in the world of the poem. A poem like 'The Woman in the Window' is a good example of what this collection does well. Objects and moment are invested with more than average power, going deeper than description." --Writer's Digest