All That Remains, Poems by Betsy Holleman Burke 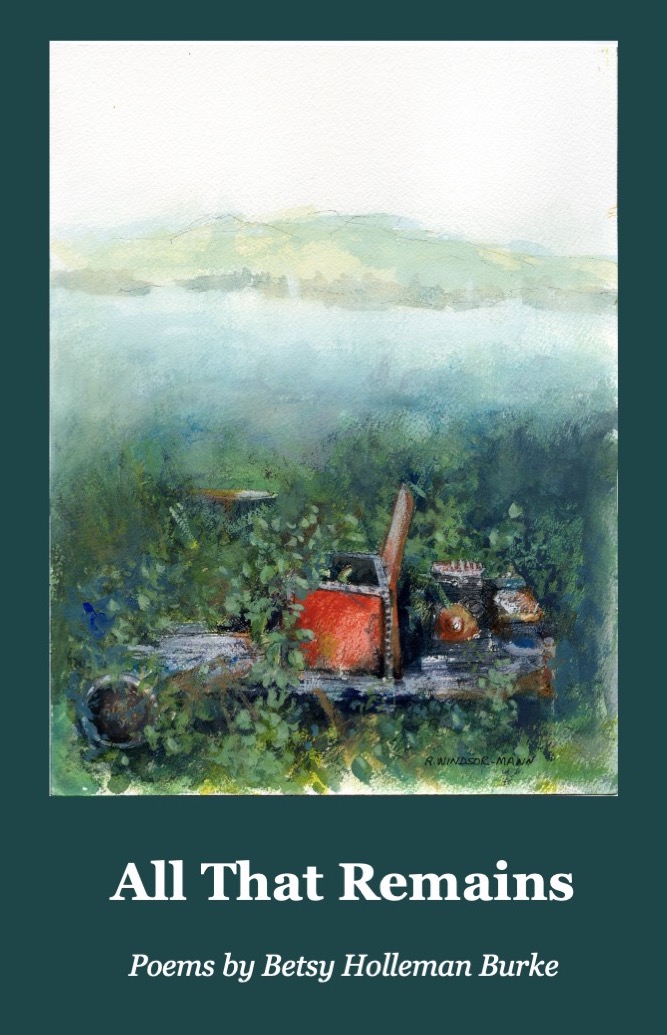 All That Remains begins with the destruction of Betsy Holleman Burke's family home. What follows are the memories which keep the place and people alive as the speaker moves into a wider world.

"What is left for us to inhabit when the ancestral home decays beyond all help and our family heirlooms must be tucked away into memory for the next generation? Betsy Holleman Burke,leads us through a Southern past rich with the nostalgia of lemon cake, Claire de Lune, and the occasional negligee, into a triptych of Giotto's frescoes where we encounter the Heavens and the Hells of our own making. All That Remains is a vivid collection full of longing for the homes and lives we carry with us and make along the way; for the natural world (a heaven on earth for the poet), and with the Spirit to prepare for the next world beyond ours, wherever that may be."-Majda Gama

"Betsy Holleman Burke's All that Remains dives into human memory rearranging fragments to 'Look, Look, Look' in order to understand and be at peace with the past These poems are full of people and nature--motion and stillness-and they reveal how human memory deals with tangible and intangible loss-from precious family touchstones such as a grandfather clock, a family pet, or fishing pole to deeply beloved relations. So much life and loss could lead to despondency, but these poems turn to the vivid imagery of hummingbirds, rushing currents, and Nature's sounds. The precise diction of well-crafted poems lay bare all that was hidden or mysterious in objects which were at times neglected or nearly forgotten. Rumi wrote, 'stone, ground, mountain, river, each has a secret way of being with the mystery. .Her poems are comfortable with mystery, the beginning is reflected in the end, and life's vitality is affirmed."- Donna Denize

"The opening poem of Betsy Holleman Burke's All that Remains introduces the metaphor of copper. Copper represents old dualistic values in the family house, in the form of pipes that have been stripped and stolen. As the veins of the house, the old ways have gone missing, while at the same time a natural power has replaced the human-made ones: now a copperhead, skin-shedder, god of throats and utterances, has become the Nagaraja of this homestead. The copperhead is poetry, which arrived as the vein of memory relatively late in this writer's life, and it has nested in these works with a terrifying earnest power and a command of language, music, and form. Some of the most electrifying pieces here-tender, too-include 'Bird Life,' 'Mr. Peake's Tennessee History,' 'Giotto,' 'Someone Should Tell the Bees a Family Member Has Died,' and 'Everywhere There is Sorrow.' Betsy Holleman Burke has devoted her practice to mining the house of memory for what remains, and she has done a glorious job in finding much alive there, whether threatening, joyous, buoyant, scuttling, wounded, or being born. She is a poet of lament but also praise, and her work is testament to the difficult attention the poet must pay to the Real in all its breathtaking forms."-David Keplinger