Waking From So Rich A Nightmare, Poems by Gay Giordano 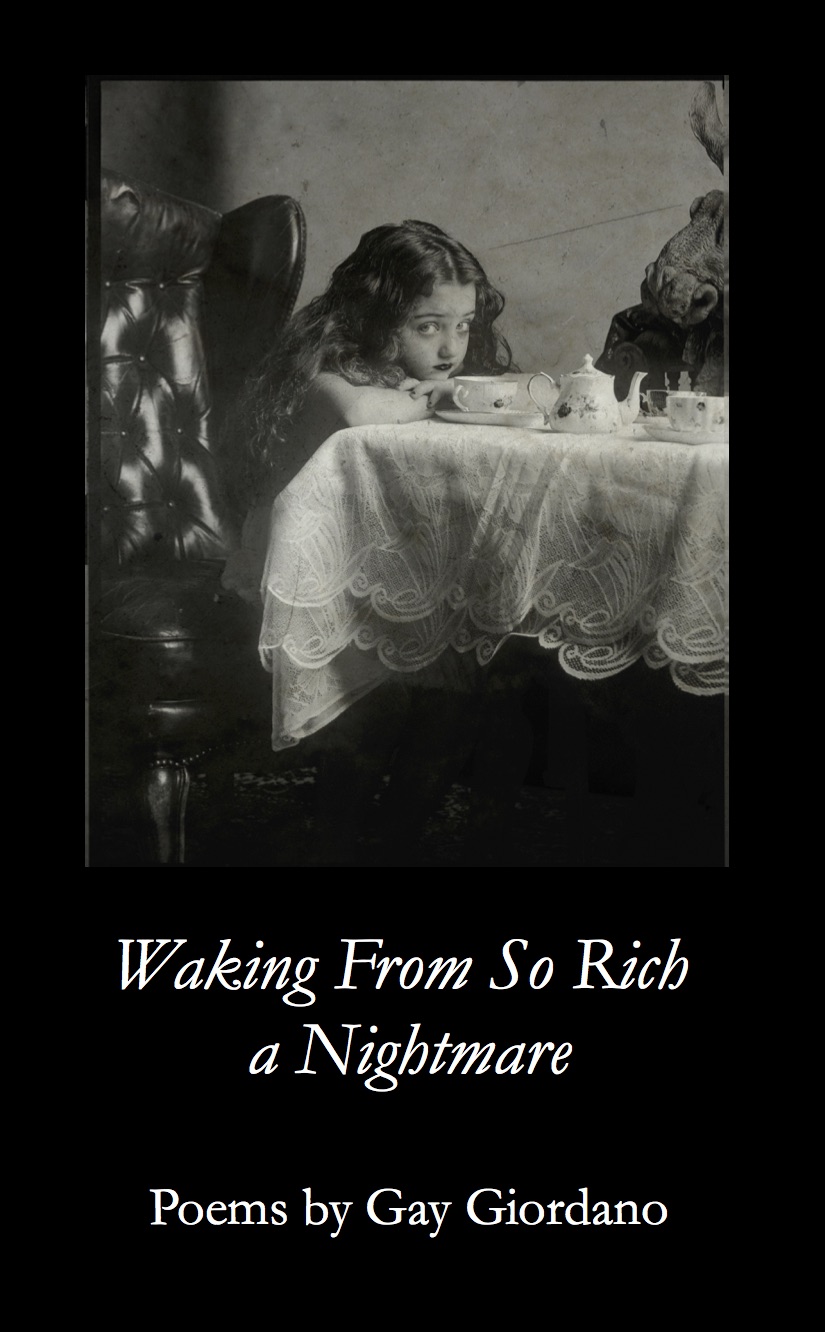 Holding the dark at bay, the dreamlike poems of Gay Giordano's Waking From So Rich A Nightmare stand against the unknown, intuiting with wit and vision that which we can perceive, even if only fleetingly.

"There are some nightmares from which I don't wish to wake. Gay Giordano's Waking From So Rich A Nightmare is one such dream within which I'm happy to exist. Although these haunted, beautifully fashioned poems inhabit an oppressive, lonely universe, in which humans never seem to touch, or receive comfort, 'struggling for a foothold in this notch of the universe', and learning 'how not to ask for things', Giordano's language lifts this world to one of wonder and revelation. The spirit of the speaker, and the poet, are filled with too much grace to lose faith."-Justen Ahren

"Gay Giordano's debut collection Waking From So Rich A Nightmare reads like a 'selected poems' -- there's maturity and wisdom here, the confident voice of a poet in her prime. This book is full of surprises, none greater than the striking freshness of the images, one after another, as they tumble down the page, unlikely, evocative, reckless, and just right. You will be caught up in the sensory spell cast by these rich poems bursting with 'unimaginable otherness'."-- Jim Daniels

"What is the world and what is a dream? How are we moored to each other and how, from each, do we wake? These are just a few of the questions Gay Giordano's furiously beautiful Waking From So Rich A Nightmare concerns itself with. World and dream exist simultaneously here 'the way Vermeer's blues argue with his yellows'. Here you will find 'angels with terrifying compasses/ out to decide a new geography'. Here 'nothing is like it used to be/ and what used to be was not itself either'. Indeed here 'your future presents itself like an outdated waistcoat' and yet you find 'strange sanctuary'. In the dream/world of these poems we reside '...under a moon shaped like a button/ coming through a buttonhole'. We experience one realm slipping into another. Whether dreaming a life or living a dream, Giordano employs language alternately as the whip and the horse to be beaten, as both the waistcoat and the seamstress embroidering it, 'wanting and not wanting nature's odd things'." -- Jennifer Tseng

"Waking From So Rich A Nightmare by Gay Giordano resonates with beautifully crafted poems that reveal night's migrations in city streets, gutters, lovers' entangled arms and are simultaneously interior landscapes of sorrow, the pain of relationships. 'The night was not itself but a thing/that had already gone away/leaving mysterious tracks.' But these poems are also filled with blazing days. And the book ends in triumph as Giordano looks back on her childhood. 'That urgent horse is me/running away to mix more paint.' It's a wonderful and revealing book."--Marguerite Guzman Bouvard