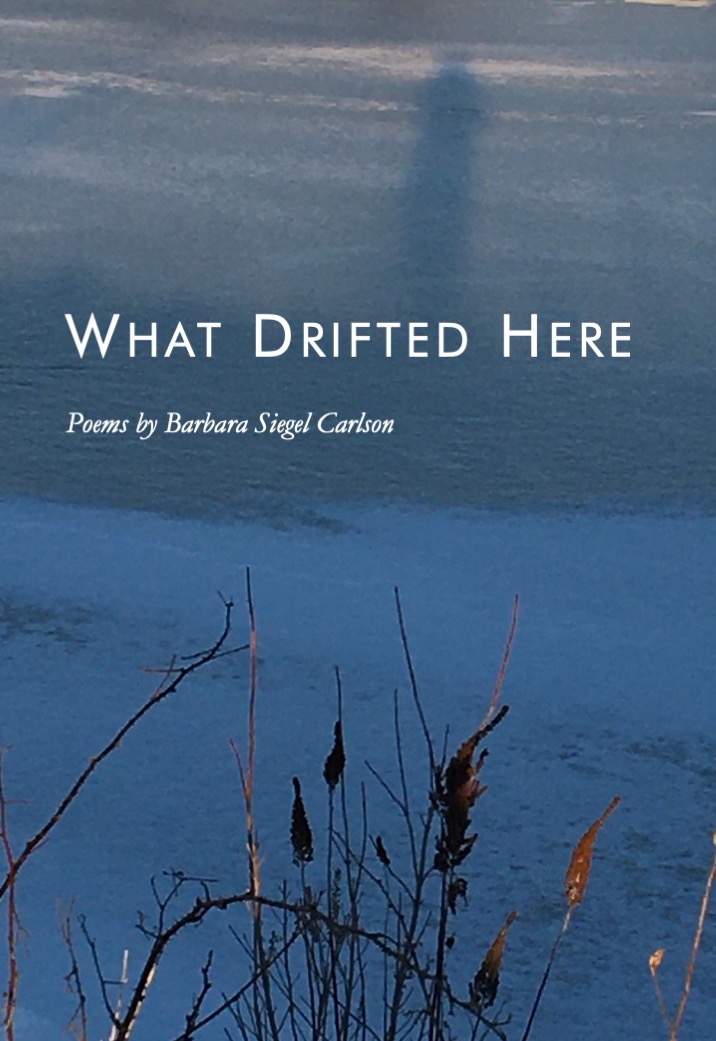 What Drifted Here is a book of intensely lyrical meditations that dwells in the silent, often overlooked or seemingly ordinary places where the mysterious and miraculous abide, and where amidst love and grief, we draw ever closer to the heart of the spiritual. The poems, some in prose form and dramatic monologue, take dreamlike leaps into worlds both personal and historical, glimpsing through the cracks something we can never wholly know but which leaves us changed.

“The lines of Barbara Siegel Carlson’s poems are like the filaments that Walt Whitman’s ‘noiseless patient spider’ launches out of itself. Flung across time and space into the silence, Carlson’s lines catch, in their ‘fine netting,’ the lonely truths of the inward self. And more: they connect us to foreign cities, to voices from the past and strangers observed in the present, to spirit and soul. In ‘Provisional,’ Carlson describes spiders in the weeds at dawn, how each weaves a web to ‘capture what it needs/and lets the rest blow through’: so, too, for these stunning, necessary poems.”—Jennifer Barber

“‘Maybe I’m just hungry for mystical connections,’ Barbara Carlson muses in one poem and true to that idea, she does, again and again, finding expansive meanings and experiences in the simple cares of everyday. From Russia to Slovenia to Italy, Alaska, even Mars and to her own Cape Cod area of Massachusetts, she leads us on a journey that is part naturalist’s, part spiritualist’s. While she admits she can’t ‘Penetrate a Soul / Or hold a Bird in Flight,’ her words certainly can. These are poems where ‘the wind […] will never stop calling,’ where we never stop being surprised and lifted, where we will keep returning to.”—Richard Jackson

“Barbara Carlson’s book, What Drifted Here is exactly where you like an experienced poet to go: into the world’s gray with a pen, paper, and all her senses. She knows everything is an omen, everything is alive with meaning, and everything requires the observant mind to make some sense of it all. ‘Every morning the dark turns light to see something small.’ These are the words this book thrives by!”—J.P. Dancing Bear

Barbara Siegel Carlson is the author of two books of poems, Once in Every Language and Fire Road, and the chapbook Between the Hours. She is co-translator with Ana Jelnikar of Look Back, Look Ahead, Selected Poems of Srecko Kosovel. Carlson is a graduate of University of Rhode Island and the Vermont College of Fine Arts MFA Program. She lives in Carver, Massachusetts, where in her free time she likes to walk the cranberry bogs.