Secret Asian Man is a hilarious and poignant look at the immigrant experience. Ang Tunay na Lalaki (Tagalog for “The Real Man”) is the Filipino Marlboro Man, a macho and bare-chested endorser of gin. But when he finds himself in New York City and auditioning as a bit actor, disillusionment quickly sets in: he realizes he, an Asian man, will never be a sex symbol in America. Fortunately for him, adventure ensues. 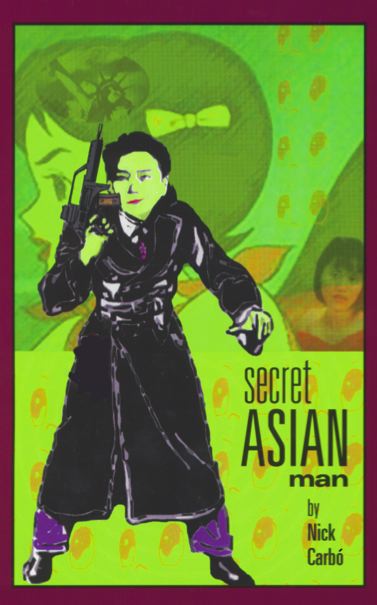 Nick Carbó was born in the Philippines and raised in Manila. He is the author of El Grupo McDonald’s (Tia Chucha Press, 1995); the editor of Returning A Borrowed Tongue: An Anthology of Filipino and Filipino American Poetry (Coffee House Press, 1996), and co-editor with Eileen Tabios of Babaylan: An Anthology of Prose and Poetry by Filipina and Filipina American Writers (Aunt Lute Books, 2000). Among his several awards are fellowships in poetry from the National Endowment for the Arts and the New York Foundation for the Arts. He is married to the American poet Denise Duhamel.

“Watch out: Nick Carbó is at it again, turning the icons of American culture on their heads. Wickedly cynical and profoundly informed, these poems take the East-West dichotomy to previously unexplored territory. This is the world of star fruit boogie and bomba, the Green Hornet and DKNY, laundromats and lavanderas, Nassau and Nasugbu: poetry by one of the few great originals.”—Eric Gamalinda, Author of Zero Gravity

“I’m absolutely beguiled by this robust postmodern superfantasy, this shockingly trangressive anti-colonial yarn of sex, the city, and human-hearted Everyman, Ang Tunay na Lalaki, Secret Asian in New York who doesn’t miss an American trick. Carbó is a genius and a con-artist, a truthsayer and a sorcerer, a mensch and a perve—or is he? Who wrote this book, anyway? Strap yourself in. Inhale these poems.” —Maureen Seaton, Author of Furious Cooking